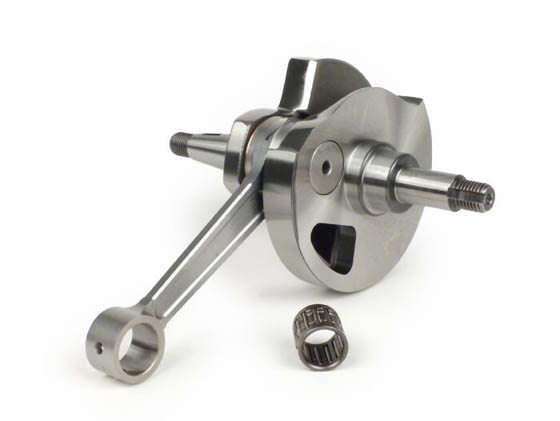 VE10539 BGM PRO TOURING ROTARY VALVE CRANKSHAFT 57mm STROKE. Like in the good old days at Piaggio, the bgm PRO crankshafts are forged.The forging process gives a much higher density to the material. So you gain a better thermal coefficient and a much stronger material. Beside the crank webs the con rod is forged as well and afterwards CNC finished. There is no doubt about the lubrication and bearings of the crankshaft. The lubrication of the big end pin is by two large slots and four additional pockets at the side. For the lubrication of the small end bearing there are two holes at the small end. The delivery contains a INA small end bearing. The crankshaft is available with longer stroke 60 mm and standard stroke 57 mm. The long stroke gives not just more cc, it enables you to set the port timings of the transfers and exhaust more freely. The bgm PRO Racing crankshaft has a much better inlet design than any other crankshaft: The inlet timing of the standard crankshaft is not suitable for tuning purposes. The timing is too short and once you reach a certain amount of revs, the inlet timing will close off. The bgm PRO crankshafts is closed after 58Â° after top dead centre. Something we figured out with heavily dyno and road testing. With the bgm crank the set up of the engine is as easy as if an OEM Piaggio crank is fitted. The improved timings are capable of working with the most powerful cylinder kits. Even with the tiny SI carb power figures of more than 20 hp at the rear wheel are easily to achieve. Fitment LML STAR 125 2 STROKE VESPA 125 - P125X 1978-1981 VESPA 125 - PX125E 1981-1984 VESPA 125 - PX125E DISC 1998 ON VESPA 125 - PX125EFL 1984-1997 VESPA 125 COSA VESPA 150 - P150X 1978-1981 VESPA 150 - PX150E 1981-1984