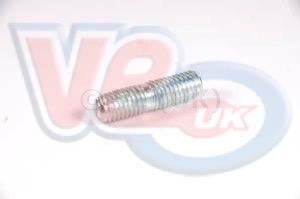 Standard Vespa hub stud (brake drum stud) M8 x 30mm with hollowed bottom so it can be swaged in place, equivalent to Piaggio Vespa part numbers 085914, and 229769. Studs are fitted from the front of the hub, and once wound into place the rear is swaged over to prevent them unwinging, to remove the old stud, first the sawged end of the original stud must be ground off on the rear of the hub, as this is wider then the hole and may damage the threads unless its removed, then the old stud can be unwound from the front side of the hub. Once the new stud is in place the rear will need swaging over in order to fix the stud to the hub.