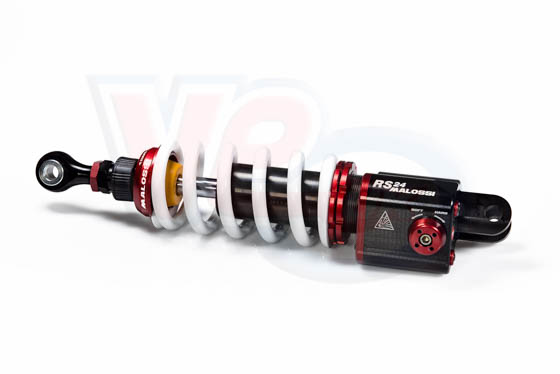 VB468360 Malossi RS24/10-R Hydraulic pneumatic shock absorbers with variable suspension. The RS24/10-R rear shock absorber for maxi scooters consists of a single body crossed by a newly-designed hydraulic circuit that allows all adjustments to be integrated while maintaining the same dimensions as the original shock absorber, without reducing the overall dimensioning of the hydraulic brake. The shock absorber is fitted with no less than 4 adjustment devices: 1 - Wheelbase adjustment device. Turn to modify the height of the rear axle - 2mm + 8mm with respect to the original. 2 - Extension adjustment to change the brake during re-opening of the shock absorber after being compressed. 3 - Adjustment of the spring pre-load to increase or decrease the âinitialâ load of the shock absorber and consequently to determine the greater or lesser initial rigidity of the system, i.e. the effort required to start the suspension by adjusting the agility, manoeuvrability and stability of the vehicle. ATTENTION: Adjustment of the spring pre-load must be performed according to the extension, the weight of the vehicle and the rider with possible passengers. 4 - Compression adjustment to control the brake when closing the shock absorber and varying of the behaviour of this in relation to the unevenness of the ground. It is possible to use a more rigid but more stable sporting set-up or a gentler more comfortable touring configuration. The regulation acts at low shock absorbing speeds, that is during operation of the shock absorber on bends or when traversing slightly accentuated holes. At high speeds, instead, when, for example, pronounced potholes are present, perhaps in a completely straight line, a brake consists of a 20mm sintered piston with a specially calibrated valve pack. The RS24/10-R is equipped with two nitrogen tanks for rod compensation. This system is used to completely modify the load curves depending on the pressure of each chamber, that is the handling modes during compression and extension, and guarantees greater compactness to the shock absorber with respect to the system with a single external tank, reduced friction and greater dispersion of the heat produced by functioning of the system. Body and fittings in anodised ergal, internal components in hard anodised ergal, 16 mm rod with thick hard chrome Double acting 40 diameter piston (compression and extension) Diaphragms in technical material with low friction and high durability Neoprene pad for Yamaha T Max 530, Kymco AK 550 Polyurethane pad for BMW C 600/650 Low viscosity index oil to minimise variations in hydraulic brake behaviour according to temperature. Cross reference 4618360. Fitment BMW 650 C600 SPORT - 2012-2015 BMW 650 C650 SPORT - 2016-ON