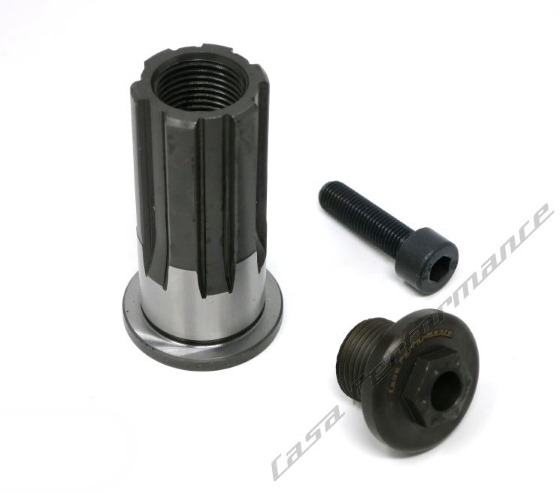 CL11022 CASA PERFORMANCE UPGRADED DRIVE SPROCKET SLEEVE ASSEMBLY - FOR STANDARD CASE. Casa Performance largeframe Lambretta drive sprocket assembly upgrade kit. The actual design of the entire original front sprocket assembly on largeframe Lambrettas is pretty dire, to say the least. Weâve all seen sidecasings where the sprocket assembly bolt has come loose and then unwound itself back out, usually damaging the sidecasing in the process. In extreme cases the bolt actually comes through the sidecasing! The reason for this - apart from possible misalignment when tightening - is that the bolt itself is subjected to massive âshocksâ with each acceleration and gearchange as the large sprocket spring exerts huge, constantly varying levels of pressure against the head of the actual bolt. All summed up, itâs no real wonder that it can work itself loose. Add to this the fact that the whole assembly is held together with a long, spindly 8mm bolt that is also not hard to distort. For a while now we have been testing a new design, that brings the front sprocket assembly bang up to date, and much better suited for the larger power/torque motors now in vogue. We thought âoutside the boxâ and stated from scratch. We took innocenti blue-print drawings as a base for the project and redesigned the sleeve collar, although it was important to us that it had to take the standard Lambretta drive sprocket components. âSo what are the advantages of the Casa Performance collar sleeve set-up compared to the originals?â Firstly, there is an internal shoulder and the collar sleeve is now fixed to the crank with a short, high tensile 8mm Allen screw. The collar sleeve also has a large, internal thread and this is to take the new (supplied) 18mm (!!!) threaded cap nut. Once tightened down, this holds all the spring and sprocket components in place. Yes, you read right thatâs a massive 18mm thread compared to the 8mm original!!! The Casa Performance set-up eliminates the original long, thin 8mm bolt and all the associated problems with it coming loose, and possible breakage. Original bolts are usually extremely hard but we have seen that with most of them now being over half a century old, they can become âbrittleâ and itâs not uncommon for them to break, snap or fracture. Modern remade sprocket bolts tend to be much softer and can stretch, with the consequence being that it then comes loose and unwinds inside your engine casing. Not good. The second advantage is that unlike the originals, the Casa Performance set-up does NOT need an extractor to remove it from the crankshaft. The new large 18mm cap nut has a central hole. The reason for this is that when you unscrew the Allen screw that holds the actual collar sleeve to the crank, it acts as an extractor and effectively pushes the whole assembly off the crankshaft in one go, without the need to dismantle anything! Thus meaning that you no longer need a puller! Sorted. Want to see how it works? We have also produced a