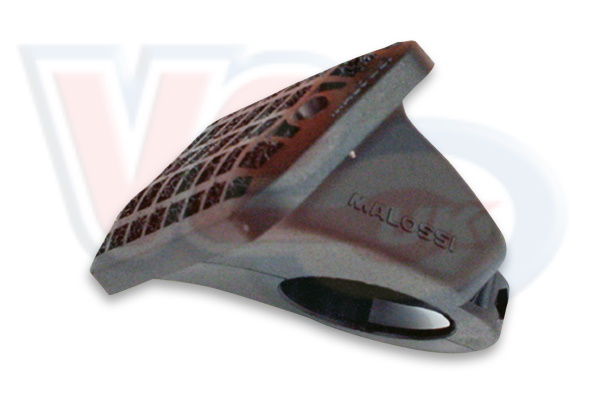 VM041418 MALOSSI 32mm E12 AIR FILTER - DELLORTO PHBG CARBS. RED FILTER more oxygen to the engine, The quality which confirms the success. Too often we neglect the simplest and in fullest sight components of our engine, whereas we could allow it to work better, to give better performances and to be more long-lived, with little operations. Let's consider for instance the feeding system, which supplies the storeof air and petrol tightly releted to the engine performances. The filter task has vital importance. In fact on the one hand it must prevent any impurity (which could causes serious damages in short time) to get into the engine on the other hand it must give has to allow the best possible breathing, without stifling the engine. These two tasks are one the opposite of the other, and only a first quality filter, which is the result of careful studies and of Malossi experience,made of the best materials, can conciliate them. Therefore, it is not by chance that all the best manufacturers start right from the filter design, which is the first component of the engine breathing chain, in order to make highest performance engines suitable for the racing employ.Undisputed leader both in making racing scooter engines and special feeding systems, Malossi have had the chance to get ready the best scooter filter so far produced. Its name is RED FILTER and it is characterized by a very light and removable network bearing structure and by a filtering component made of expanded polyurethane with open cells, self estinguishing and with a big accumulation power. This filter can be fitted on each scooter in a few minutes because it is equipped with special connections, which allow fitting it in the best possible position. Its pipes and surfaces have been expressly calculated to achieve the best possible performance for any model of scooter. It guarantees high performance constancy, too. After having carried out the necessary and simple periodic cleaning operations, RED FILTER guarantees always perfect engine breathing making the engine itself more long-lived. The benefits concerning the pollution must not be neglected: an engine which breaths better is an engine which pollutes and consumes less, too. Cross reference Malossi 04 1418.